At least 21% of Tennessee teens were bullied on school property1

At least 10% have experienced sexual assault1

8% have chosen to miss school because they felt unsafe1

Social Emotional Learning, or SEL, is a framework for student support and school improvement that focuses on teaching social and emotional skills to both teachers and students while creating and maintaining a safe, caring learning environment. SEL core competencies include self-management, self-awareness, social awareness, responsible decision-making, and relationship skills.

In 2011, the Behavioral Health Alignment Team recognized an urgent need to educate teachers and school staff in Social Emotional Learning competencies and practices, in order to create long-term systemic change around positive school climate, stronger support systems for students, improved student health, academic engagement, and overall success. The A-Team undertook an effort to begin embedding SEL into MNPS and the wider Nashville community by presenting an annual collaborative professional development event called The Social Emotional Learning Conference. The first conference, in July of 2011, brought mental health providers, SEL experts, and other community partners together around a common goal to provide a variety of workshops throughout the day for educators, promoting understanding and awareness of SEL and how it impacts school climate and academic engagement, and also teaching on-the-ground skills that allow teachers to become models of SEL practice for their students. The first conference served around 150 people and offered 20 workshops and a small student panel.

The conference has grown substantially over the years both in size and in popularity. The A-Team has worked to add in new features each year such as national keynote speakers, an expanded schedule, a pre-conference SEL Basics workshop, and more. This year’s conference was held June 19, 2015 at Cane Ridge High School in Antioch, Tennessee and is the fifth installment of this popular and informative event, bringing in over 720 registrations. The 2015 conference was titled Grow, Achieve, Empower Through SEL and featured a keynote address from renowned SEL expert Dr. Jeff Duncan-Andrade, San Francisco State University Professor of Raza Studies and East Oakland high school teacher with experience teaching students dealing with toxic stress. Volunteer presenters from around the city provided over 50 unique workshops during four breakout session slots. Subjects ranged from exploring Adverse Childhood Experiences (ACEs) and their effects on school behavior and performance, SEL practices for students with autism, mindfulness techniques in the classroom, child brain development, engaging parents in SEL development, and beyond. An exhibitor hall was featured where 25 businesses and organizations that support SEL and mental health in Nashville and beyond were on hand to share information about their services and provide freebies. Additionally, thanks to generous sponsorships, the Behavioral Health A-Team was able to provide boxed lunches for free to all attendees, exhibitors, and presenters.

Community engagement is a key component to the sustainability of the SEL Conference. The tactic relies on community partners to provide workshops and financial support for the conference. Not only does engaging community partners make the conference viable and cost effective, it also ensures that the catalog of workshop offerings comes from diverse perspectives and stays current and relevant from year to year.

The Behavioral Health A-Team released two Invitations to ParticipateTM  for this tactic: one to attract workshop presenters and one to solicit sponsor-exhibitors. A diverse group of agencies from across the Middle Tennessee area, and even a few from out of state, answered the call. The team received 59 responses for workshops offerings and 24 responses for exhibitors. Of these responses, 78 partners rendered services at the conference.

% increase in MNPS staff reporting an atmosphere of trust and mutual respect in their schools (Baseline: TELL Survey 2012; 66%)

ACTUAL: In addition to the annual SEL Conference, there is at least 80% more institutionalized SEL-related professional development training currently offered to MNPS staff and teachers as a result of partnerships created over the multi-year development of the conference. This includes Olweus bullying prevention, Responsive Classroom techniques, Restorative Practices discipline alternatives, and more.

Highlighting the recognition Social Emotional Learning is now receiving in Nashville and across the country for its ability to improve student outcomes, the opening remarks of the conference were given in part by Nashville Mayor Karl Dean. His remarks included an inaugural award presented to MNPS superintendent Dr. Jesse B. Register from the Behavioral Health A-Team for excellence in his dedication to ensuring SEL is embedded across the district. Mayor Dean spoke about Dr. Register’s hard work to implement and promote SEL understanding and on-the-ground practice among educators during his tenure as MNPS Director of Schools.

“I LOVED the keynote speaker [Dr. Jeff Duncan-Andrade] and his speech. His words resonated with me and were applicable to students in our school. It confirmed we’ve done some things right in our school and the results are evident in our school's data.”

With another successful year under its belt, the SEL Conference is well on its way to institutionalization within Metro Nashville Public Schools, and the collaborative event has created systemic change around SEL in Nashville by increasing awareness and understanding among educators and community members of the core competencies of SEL and their impact on student success and children’s health. “Our schools are really taking an interest in SEL and the overall behavioral health of their students,” says Debra McAdams, MNPS Executive Director of Exceptional Education. Marcy Melvin of Centerstone, co-chair of the Behavioral Health A-Team, writes: “We’ve taken a step back from intervention to prevention – providing teachers and administrators with skills that allow them to model SEL with one another as well as their students.”

The A-Team is currently writing an updated Tactical Plan that will set new goals for SEL Conference outputs, short-term outcomes, and mid-term outcomes to respond to the growth of the event over the past five years. 2016 will see a two-day conference schedule, with more time and flexibility for workshop attendance and a broader range of topics covered. 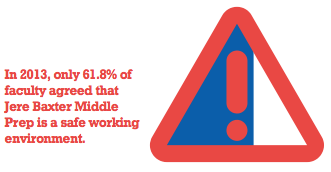 97% of Jere Baxter students live at or below the poverty line. Jere Baxter Middle Prep, located in northeast Nashville, has historically struggled with low literacy and math comprehension, high mobility rates, trauma exposure and behavioral problems among students, and other difficult issues impeding student health and success. During the summer of 2014, as one method of tackling these interconnected problems, Jere Baxter’s administration began building a plan for an expanded school day schedule featuring partner-provided programming and professional development, to begin with the 2014-15 academic year. Titled ExSEL – short for Extended SEL (Social Emotional Learning) – the new initiative would introduce a pilot run of six designated 70-minute extended school days during the year. The school hoped to create and leverage partnerships with community organizations and providers to introduce Social Emotional Learning-focused programming for students and staff during this extended school time. With few existing partnerships in place to start out and the school year quickly approaching, Jere Baxter approached Alignment Nashville for assistance.

The Behavioral Health A-Team saw an opportunity to support both Jere Baxter and other MNPS Innovation Zone schools that will be shifting to an Expanded Learning Time schedule in the future and went to work creating a scalable pilot plan for engaging business and community partnerships to provide programming for students and staff with this extra learning time. The pilot includes:

The Behavioral Health A-Team initially released an Invitation to Participate™ (ITP) in the fall of 2014 to engage partners with the ExSEL pilot. The A-Team hosted a community meeting that drew over 30 representatives from organizations across Middle Tennessee, several of which were first time partners such as The Elephant Sanctuary, Urban Green Lab, and National Museum of African American Music. Overall, the team received 15 responses to this ITP, and partners provided a wide range of experiences: The Elephant Sanctuary provided a set of enrichment modules via video chat to their preserve in Hohenwald, which enabled students to see elephants up close and personal and learn about behaviors and relationships in a very unique way; while the Museum of African American Music brought in actual musicians to teach spoon lessons and foster creativity.

The ITP was released again for the 2015-16 school year and continues to draw new partners to support the ExSEL program at Jere Baxter.

The 2014-15 pilot was a great success, with students actively engaged and excited about the content. The school actually experienced attendance increases as high as 14% on designated ExSEL days above normal school days. Teachers also reported positive experiences in professional development sessions, gaining skills they were able to put to use immediately. Principal Miriam Harrington also noted that ExSEL has become a selling point for parents and is helping to retain as well as gain new students.

Coming off a very successful first year at Jere Baxter, in summer of 2015 the Behavioral Health A-Team once again went to work to bringing partners together in support of the school with a targeted Invitation to ParticipateTM for ExSEL 2015-16.

Building off the success of the initial pilot year 2014-15, Jere Baxter’s administration has decided to grow the ExSEL schedule for 2015-16 to include 9 ExSEL days with 2 sessions for students and 2 sessions for staff on each day and is excited to welcome new and existing partners into the school. As of the fall of 2015, 13 partners have engaged to provide enrichment or professional development and have been placed on the ExSEL schedule, and the team is actively recruiting more.

The Behavioral Health A-Team will continue supporting Jere Baxter Middle Prep throughout the 2015-16 year, bringing in new partnerships via the yearlong ITP and keeping tabs on the school’s needs. The team hopes to scale the pilot to an additional Expanded Learning Time school during the 2016-17 year.

Center on Great Teachers and Leaders

Creative Genius In You

Tennessee Justice for Our Neighbors

"The continued focus on implementation of Behavioral Health/Social Emotional Learning at a district-wide level has leveraged the belief that all youth in Metro will develop SEL competencies. As the work on the SEL Conference continues to grow, we will collectively impact all youth and families that are a part of the MNPS community."

"Our team has helped to elevate the SEL conversation here in Nashville and across the region and country.  Our first SEL conference was attended by 250 educators and community members.  This year attendance grew to over 650.  That is a real indicator of the growing interest and value in social and emotional learning and in supporting the behavioral health and wellbeing of our teachers and students."