Although these numbers have continued to show a significant decrease in recent years, they still continue to be higher than the national average (26.5 per 1,000 girls2). According to the Tennessee Department of Health, some factors that contribute to adolescent pregnancy include lack of family and community support, lack of involvement in school and recreational activities or after school programs, lack of feeling connected to school, family and community, lack of health education, lack of responsible adult guidance, and limited knowledge about sex and sexuality.3 The ASR A-Team works to address these barriers, specifically targeting those community members and professionals who work closely with adolescents. 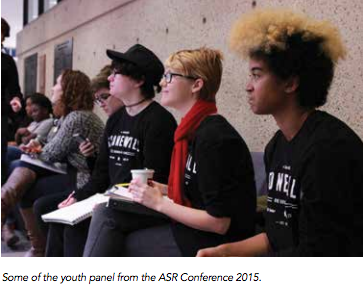 The ASR A-Team knows that every person who works with youth runs into difficult questions about sexual decision-making, healthy relationships, sexual and gender identity, and sexual health. This year, the conference theme is “BACK TO BASICS” and is designed to train everyone with up-to-date, science-informed, youth-focused tools, skills, and knowledge to feel more competent handling those tough situations. The plenary and sessions will focus on anatomy and sexual development, decision-making, birth control and pregnancy prevention, STI’s and HIV, with a concentrated focus on healthy relationships, gender identity and sexual orientation, and navigating professional and personal boundaries.  Those new to working with youth will be able to build a strong foundation “101” level sessions while more seasoned professionals can stretch themselves in the “201” level sessions.

The ASR A-Team began planning for the ASR Conference 2015 in March 2015. The A-Team hosted a community meeting on Thursday, July 30th to offer interested organizations more information on the conference and how to submit a proposal to become a presenter. After the community meeting, a total of 12 ITP responses were received. One of these responding organizations agreed to present on more than one topic. The A-Team decided to reach out to a few of the responding organizations with suggestions on modifications to their proposals in order to best fit with the overall theme of the conference. Along with the modifications added, the A-Team approved all of the ITP responses. The conference this year included 13 total presentations with a youth panel. The following is the list of participating organizations: 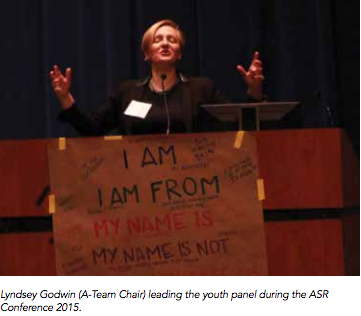 You Have The Power

(to be measured 6 months after the 2015 conference)

At least half of the participants of the conference utilize new resources or tools gathered from information given during the conference and implement them into their daily work duties.

Foster relevant relationships between educators and community providers to support the health and well-being of young people. (79% reported that they networked with others whom they expect to hear from in the future.)

The ASR Conference typically reaches over 70 school counselors, community members and educators each year. Participants have reported learning new skills to take and incorporate into their everyday work with youth. They have also reported making new and valuable connections with other people and organizations that perform similar work within the community. By increasing participation every year and gaining new participants who have not previously been involved with the conference or the ASR A-Team, the A-Team hopes to be able to spread awareness about the seriousness of issues with youth and encourage consistency with sexually responsible messaging portrayed to youth.

What did you hear at the ASR Conference this year that really impacted you?

My first time attending the ASR Conference was a real eye opener for me. Hearing from the students who are the sole reason why many of us became educators really struck a nerve. With so much emphasis being placed on testing, scores, and political stance, etc. it was moving to hear how they view us as adults. How they view the different roles we play and the level of trust that they have in some was a real gut punch. It made it clear to me that we need to pay more attention to the "whole" student and not just a percentage or data. If we don't we may miss out on touching one of the next great minds or individuals in this generation and generations to come.

Which tools and/or resources did you receive that you plan to use in your work?

Communication is key in any relationship and it is something that we as educators need to pay more attention to. We can have a more meaningful intent when communicating with the youth, our students, and each other without any alternative motives. It will help build a solid foundation for a long meaningful and honest relationship with our students as well as other stakeholders. The better we communicate the more we can possibly achieve

What can we add to the ASR Conference that would help you in your work with youth?

I am a firm believer in less is best but if I had to add something more meditation or stress relief information would be great for students as well as those in attendance.

What type of community support is helpful to you in serving youth in your school?

We have a lot of barriers when dealing with health and wellness specifically sex education. If we could have more ready available information that we could give to those who we see may need to be guided to the RIGHT information it would be a big help. Many of the community-based organizations have great speakers and information that would be great for our students however there is a lot of legality that sometimes prevent the information from getting to the right people or the powers that be may not see a need for the information. It might be a bigger problem but if we could get those who need the right information to those community organizations without it having a stigma it would be an added tool in my toolbox but most importantly it would benefit the students.

Navigate YOU Counseling and Consulting